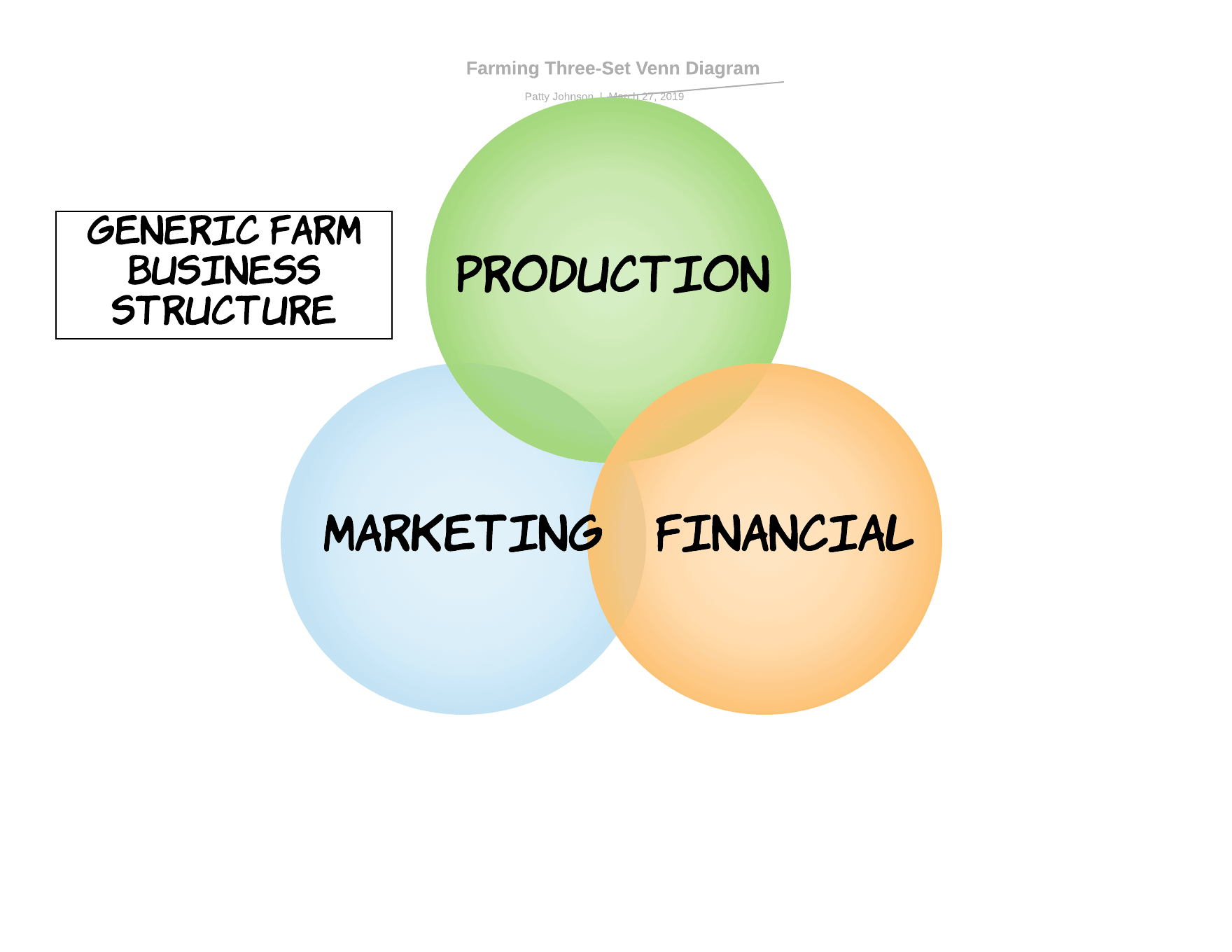 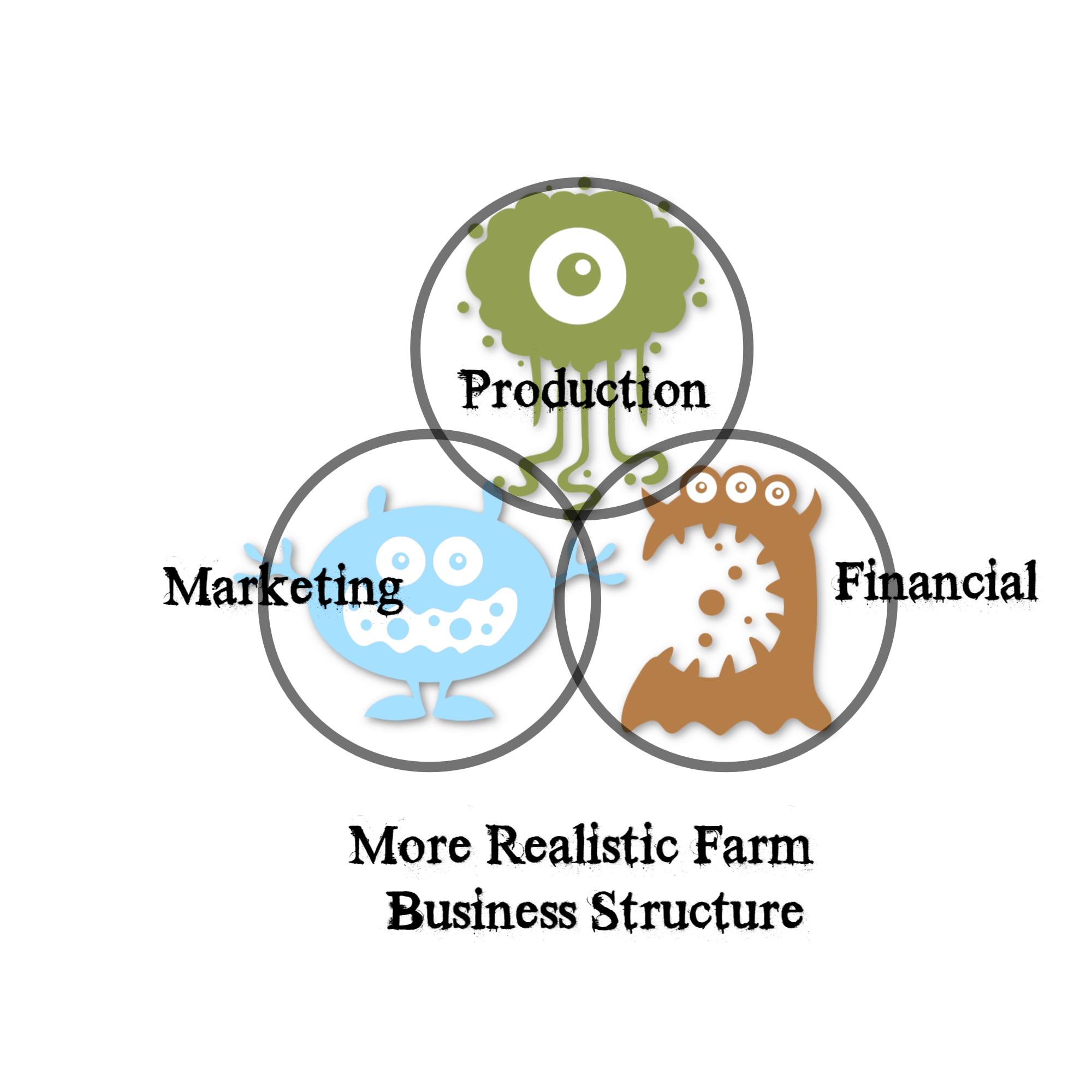 Certain graphics seem to show up in more than their fair share of PowerPoint presentations. The three-legged stool is one that shows up in a lot of briefings, but I have good news for you. It’s not going to show up here. It’s not very good at reflecting how farming works.

I’m sure that in some agribusiness class these concepts are presented, but, since I’ve never really attended any formal agriculture classes outside of my high school ag classes, I’ve never seen this presented anywhere. So if it’s wrong, too bad. This is my version that I made up. And you get what you pay for.

So the whole three-legged stood things doesn’t work very well for farming since the three main domains, move and shift, shrink and grow constantly. These variations occur hourly, daily, and over the course of growing seasons and lifetimes.

This is where you make your business and financial decisions. Do I buy land or rent? Do I live in the tenant house on the farm, or do I build a new house? Do I make hay or buy hay? What business structure makes the most sense for me and my operation? Insurance decisions. Do I apply for a grant? Do I hire anyone? Transition planning. New or used tractor. Four-wheeler or side-by-side? Is an guard dog a wise investment? Do I do on-farm slaughter? Kill fees. Transportation costs. Feed costs. Buy a bull or AI? What’s my accountant say? What’s my attorney say?

This might just be the most elusive concept to grasp. First off, the word “marketing” itself has different connotations within agriculture. If you’re talking commodities, “marketing” is selling – taking things to market, leaning more towards the traditional use of the word. It’s trading and timing. It’s political analysis and market analysis. It’s wonky.

If you’re talking direct sales, say, your homemade cheeses, for instance, “marketing” is more like advertising. It’s getting your product in front of consumers. It’s the convenience or the price point or the packaging. It’s creative.

So what’s this all got to do with anything? Everything.

If you’re a hobbyist, or a homesteader, the bulk of your time is spent in the production sector. Your customer is yourself, or your family. The business part still exists, whether you think of what you’re doing as a business or not. The resources – time, cash and mental bandwidth – are still being used. Fact is, your probably not going to generate any income if you operate in this sector alone. You’ll most likely never sell enough of anything to cover your basic expenses, let alone your mortgage payments. It’s a value judgement. But I think it’s better to just accept that this is most likely not ever going to be a profit-making venture. That doesn’t mean it’s not a worthwhile venture. Just don’t fool yourself.

If you’re producing a commodity, what does the production side look like? Well, it looks a lot like all the equipment moving up and down the road at certain times of the year. And it sort of depends on what that commodity is. Hay and calves are the two big commodities around here, though there is certainly a lot of grain produced in this region. And quite a few producers do all three. Between April and July, you’ll see a lot a activity on farms here in Central Virginia. Most farmers have finished calving by now, and are focusing on planting, carefully watching as soil temperatures creep up. Haying won’t begin until May, and there may be some small grains – oats, wheat, rye and barley – to be harvested, but they’ll just get hauled to the local coop. These aren’t high-value crops to be stored or shipped. For the most part, nobody is thinking about what’s happening with interest rates, or what’s happening on the Chicago Board of Trade.

If you’re direct marketing – growing or producing something that you’re going to sell directly to the end user, the production side is consumer driven, and it can get fairly complicated, because so many consumer decisions are price driven, and time sensitive. They want your locally sourced, organic, heritage, never vaccinated, grassfed, humane certified ground beef, but only at a certain price point. And they want it available all year long. Various storage options can make this all easier, and it often makes sense to flatten out your production in response to consumer demands. But that can greatly increase the workload on the producer, as well as the cost.

Hay is the one crop we grow around here that falls into both the commodity and direct market categories. For the most part, transportation costs limit the distance it travels, so most hay is produced for on-farm use, or it’s sold fairly close to where it’s made.

No matter where you are in agriculture – landowner, producer, or service provider – the financial side of the house is where all the critical decisions are made, and for a lot of us, the financial is the easiest to ignore until it’s a problem. We’re focused on calving, then planting, as the pile of paperwork in the office gets bigger and bigger, while the checking account balance gets smaller and smaller. It’s the same work-flow, cash-flow crunch that every business sees, it’s just that the time-scale varies a bit. Beyond time and cash, there are real estate taxes, personal property taxes, depreciation, buy equipment/lease equipment decisions. Retirement plans. Workman’s comp. Payroll. The accountant, the attorney, the financial planner, the transition planner, the loan officer.

You get the picture. The depth and scale are as incomprehensible as they are invisible. We have to manage it all anyway.

If you’re selling eggs to your neighbor, this side might be fairly simple. If you’re renting out farmland, you’re assessing cash-rent rates, and maneuvering through the tax structure. If you’re producing a commodity, you’re doing all the above, and if you’re direct marketing, it’s even more than that. Everything associated with retail sales is on your list.

In addition to producing goods, and managing our bank accounts, we need to get our products into our customers hands, whether it’s a dozen eggs to a neighbor, or a load of calves to the sale barn. This is our customer connection – the marketing piece, payday. And it looks different for different products.

We raise beef calves. We sell them when they’re somewhere around six to eight months old. There’s a little bit of “sell or hold” thought that goes into it all, and a few phone calls, but marketing beef calves is fairly straight-forward. If we don’t sell them to a neighbor, we sell them at the local graded calf sale, and have our check at the end of the day.

Anyone producing hay for sale prefers to sell it out of the field. It allows producers to get paid earlier, and they don’t have to haul or store their product. Every time a bale of hay gets moved, the price goes up, so people who buy a lot of hay – horse boarding facilities, and some cattle producers – have their own wagons to simplify (and reduce the cost) of that process.

And if complicating the production and the business management piece isn’t enough, direct marketers get to operate in an expanded, more convoluted environment in this sector as well. For many, it’s a worthwhile venture, but in spite of those who claim that certain products “sell themselves”, they don’t do their own advertising and they don’t collect their own sales tax.

If you’re missing the three-legged stool graphic, I’m deeply sorry, truly I am. But picture my Venn diagram as sort of three shifting, breathing, shrinking, growing oozing blobs, and you’ll have a clearer idea of what the basic elements of farm management look like. 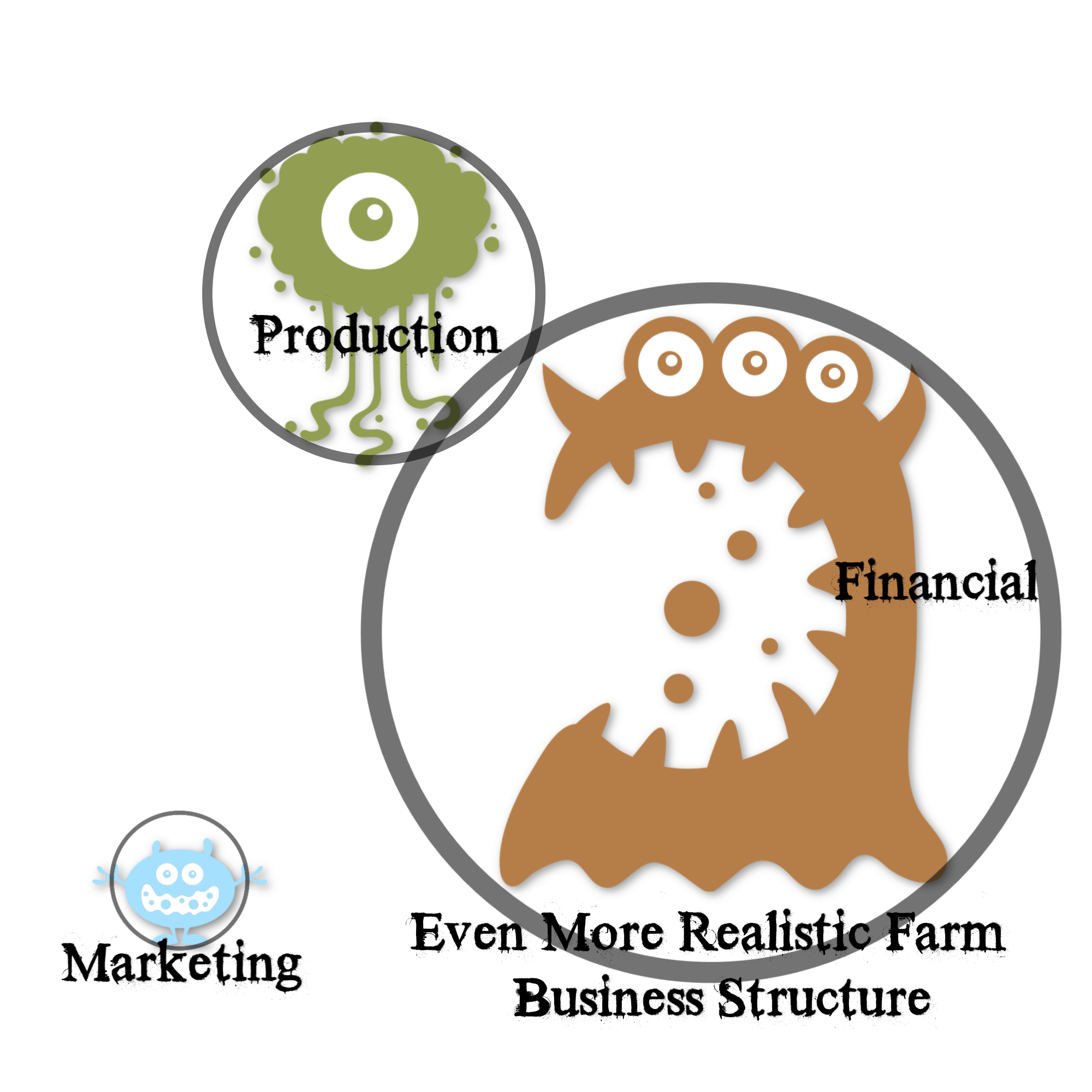 Here's an even more realistic version. Notice how the production sector and the marketing sector done even touch? This is bad. This is common

Ever wondered if there’s a difference between a farmer and a homesteader? You might find some answers here, but most likely, just more questions.