We had gone for 10 years without a porch ceiling, and though the families of barn swallows and pigeons thought that was great, our family wasn’t that impressed.

As far as the porch ceiling went, I was all about the beaded-board sheet material from Lowe’s. Eight-foot sheets, I’d slap some paint on those babies, we’d be done in a day. Look, honey. Here’s a bill-of-materials, and a time and cost estimate.

Talk about a meltdown. Break out the Popeil’s Pocket Defibrillator. Scott was a pretty firm “No” on the Lowe’s sheet material.

So when Scott’s parents were in town for a weekend, the porch ceiling mysteriously, magically and instantly made it to the top of the projects list. (Scott had developed his “It’s been on my mind awhile” tactic in response to my many well-reasoned, practical roadblocks.) Unencumbered by any costing analysis, Scott and his dad jumped into the truck, went to town, and came back with Sedwick’s entire stock of paint-grade 2″ tongue and groove.

Logically, I would have painted it before it went up, but in usual Johnson fashion, there was no time to get it painted, or even primed before it went up, which is really only an inconvenience, because I’m basically Michelangelo when it comes to painting ceilings.

Our first workday, the four of us had our workflow down – nailing, measuring, cutting, materials handling. We made it from the kitchen door, and around the 90 degree turn to the front porch. By the second day, the whole household was involved. 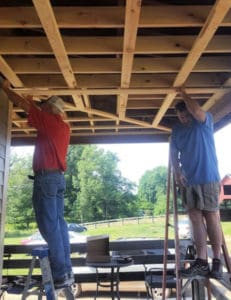 Scott’s parent will sometimes pop in for a day or two, tools in hand, giving some time for some old fashioned father-son bonding. These “short-fuse” projects are some of our best.

As far as finish, we went through the obvious, available options – haint blue, haint green, haint grey. Predictable, and basically another colored surface to combine with the other four colours we were already using on the house. Bringing in a fifth color didn’t seem to be quite the right thing to do, but we had to come up with something, because the wood needed to get something on it, because it just needed it, and secondly, the weather window on exterior painting was proving to be pretty narrow. Too hot, too rainy, too cold – all need to be taken into account, so there was a bit of a time constraint on all this.

Thinking how much the tongue-and-groove pine on the porch ceiling reminded me of the staircase in my old house, I hit on an idea – I’d stain the porch ceiling instead of painting it. In an effort to support my case, I went straight to my go-to guy for all things restoration, because merely liking something isn’t good enough around here.

Oh, and look. The National Park Service has some guidelines on porch ceilings. How ’bout dat?

Mostly proved unnecessary. Scott was all-in on the staining idea, especially since he wasn’t the one doing it.

Sanding was sort of a beast, something I wouldn’t have had to do if we had painted, or at least if would have been easier if I had done the sanding and staining before the ceiling went up. No big deal.

The idea with sanding is to provide a uniform surface for the stain to penetrate – saw marks, hammer strikes, and finger prints can all impact the uptake of stain. Sanding 500 square feet of porch ceiling with a pole-sander probably isn’t anyone’s idea of feeling empowered and productive, but at least it’s not as bad as drywall, and there are a whole lot of things worse than spending the whole day on the front porch.

(For a bit of the science behind the staining properties of wood – https://www.diffen.com/difference/Hardwood_vs_Softwood)

I’d have to do some serious digging to figure out what the specific mixture was that I used on the ceiling, and whatever it was, I probably wouldn’t recommend it anyway. It worked out beautifully, but home-made finishes tend to be unstable from a mixing perspective, even if they’re all water-based polyurethane. You end up an additional “mixing” step to every single application sequence – mix, climb, apply, wipe. 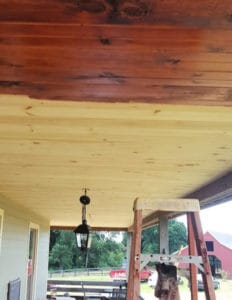 The worse part was dealing with all the well-wishers who were all quick to tell me that the job would have been easier if I had done the staining before the material went up. There is a reason I have to go to confession.

The result? A beautiful, distinctive, affordable, maintainable porch ceiling, built with a nod to historical authenticity. 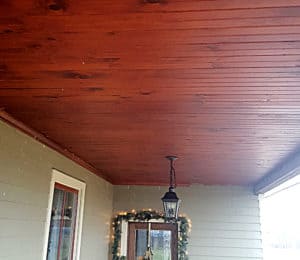 The missing trim board will be added when the soffit – the wood holding up the ceiling – gets enclosed. But for now, I’m really pleased with the look of the porch ceiling

And a marriage still intact.