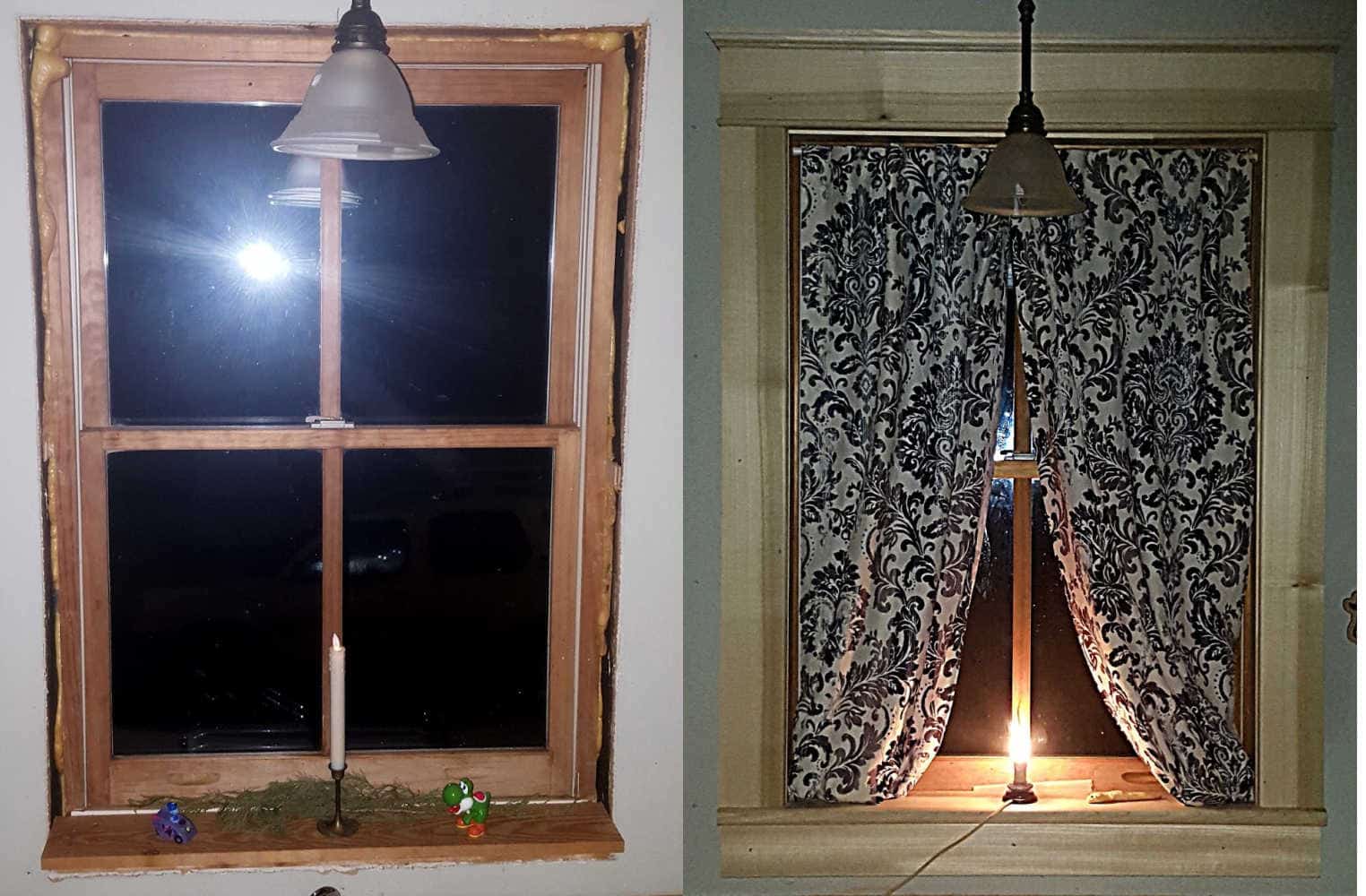 Window trim isn’t just about having pretty stuff around your windows. It provides some more utilitarian services, helping stabilize the sashes – they’re the moving parts of the window – and most importantly, helping to seal at the bottom of the window, where the sash meets the stool.

We had opted for real wood windows, which was a pretty big deal 10 years ago, and probably still is. Wood rots, and that’s definitely a drawback. So it needs to be painted, or have the surface protected by some other means. Most commercially available windows have a wood base, but are “clad” with vinyl, metal, or some composite material to protect the wood. The result is a window that readily resists weathering, either from rain or UV rays, while retaining the practical properties of the wooden frame – flexibility, buildability and insulating properties.

Since most people don’t want to bother with the headaches wooden windows can bring, full-wood windows are a special order, at least it was for our supplier. When you’re building a house, windows are typically custom order, since they’re ordered to size. Our windows needed to be custom custom order. We paid extra – in terms of time and cost – for the privilege of extra maintenance.

Considering how little it moves, any wood used in a window takes a heck of a beating. For instance, the interior surfaces of a window sash have a fairly fixed environment – stable temperatures and humidity, minimal UV exposure. The outer surface of that same piece of wood is routinely subjected to 100 degree temperature swings, soaking rains, and full sunlight.

That’s a lot to ask of a building material.

Wood is a natural product, and, as far as solid materials go, is pretty reactive to environmental forces, i.e. it warps, bends, cracks, expands, shrinks, splits, twists and pukes in response to changes in temperature and humidity. These natural contortions are dependent on wood species, age, growth patterns, cutting method, drying method, and storage method, board width and length.

But with all its drawbacks, wood delivers certain things that other building products can’t. It’s beautiful, workable, renewable, affordable, and predictable. In the course of human history, we’ve learned a thing or two about wood.

Since I don’t mind painting, and Scott’s quite the purist when it comes to building materials,we were in 100% agreement that we would have real wooden windows. And we could get them – real southern yellow pine, manufactured in Rocky Mount, Virginia.

After ten years, the outsides of the windows had been properly painted – twice – while the inside sashes had not – waiting for us to decide what we were going to do with the window trim.

Ten years of debating window trim, or any other decorative wood projects, had sort of deteriorated into series of sighs and shrugs that led directly to the impasse, without even bothering to reconstitute previous battles.

There’s sort of a running joke about how Scott needed to grow the trees himself, because he’s that much of a purist. I, on the other hand, insisted that all woodwork in this house be an exact match of the woodwork in my old house in Culpeper, from locally grown and milled southern yellow pine, but not the plantation stuff, the old stuff. According to a friend, the local mills would buy the knives – the cutting dies that are used to shape wood – and that’s what was made and sold locally. So this mill bought this set of dies, and made wood and door trim, and that’s pretty much what everyone in a particular area used, because that’s what was available.

That’s what I wanted. I could distill my argument into something like “That’s not what was in my old house” signally the end of any rational discussion.

I get a lot of stuff from salvagewrights.com, and I found quite a bit of trim that was close to what I had at my house in Culpeper, but not quite. And anything that was close had been painted at some point, and that was proving to be a problem. Whatever finish was originally on the trim was letting the paint seep through deep into the wood, meaning that we would never have any “stain grade” pieces – they’d need to be painted, and that wasn’t an option. Because “paint” vs. “stain” caused even more battles than species or style ever could.

Scott is of the mind that no wood is to be painted, while I take the clearly more logical stance that some wood can be painted, in fact some wood deserves to be painted, but either way, we had developed this sort of shorthand. “Fine. We’ll just go to Lowe’s” just meant that we were sick of each other’s crap.

Part of the problem is that we’re both fond of the Inter-War period of home design, except we can’t even come to agreement as to which wars. I think the home designs of the 1920s were beautiful, practical and well-documented. His preferences lean towards the French and Indian Wars school of architectural design.

Of course if chestnut or Douglas Fir was readily available, we’d have fewer arguments, but seriously, he could pick up a piece of oak and simply say “What do you think of this” and I’d simply respond with an eye-roll, hair-flip and heel-turn every time.

That, coupled with the fact that we were basically as strapped for time as we were for cash, window trim never made it to the top of the list, below-window-gaps be damned.

Every once in a while, we’d be at one of our neighbor’s and catch each other admiring their window trim. The trim was original to their 1910 house, and with that, Scott had been countering my canned historical relevance argument for few years. It wasn’t quite my Culpeper bull’s eye trim, but it was far more likely to become a tangible product.

I could feel myself  beginning to yield.

Eventually I resigned myself to the fact that I wasn’t realistically going to be able to replicate my Culpeper window trim. I was consoled only by the fact that I would be able to have a pretty solid copy of my Culpeper staircase, so there was that. Scott even went so far as to suggest that the simpler lines of the “new” window trim design would help counter the “busyness” we had going on elsewhere in the house with all the other wood species, surfaces, and styles.

We were going to have to compromise elsewhere, as well. Our window frames were not going to be made of home-grown, home milled lumber. And as mulled over our lack of cash, skill, time, and equipment, a former co-worker retired from his “day-job”, going into cabinet making full time. With his wife, they’re http://benttreeworkshop.com  – (dispute resolutions a specialty). We’re sort of Beta-testers as they get their business up and running full bore.

The book that’s been my bible throughout the entire house design process is a reprint of a 1920 Morgan Home catalog, back when buying your house out a catalog was a thing (think Sears houses – http://www.searshomes.org/). It not only has floor plans, it has all the dimensions for all the millwork, a huge benefit when you’re trying to replicate the look of an older home.

Based on a design from this book, Bent Tree came up with a working prototype, in poplar. The trim will be painted in the kitchen and in the mudroom, stained in the living room and dining room. (I’m voting for painting in the office, but it’s more about expediency than anything else in the office. There’s a reason we have an office door.)

We initially thought the 4″ trim looked too heavy, and we rechecked all our dimensions and it finally dawned on us that most modern door and window trim was 2.5″, 3 3/8″ at best. We’re right, the rest of the world is wrong.

We’re liable to get off track a bit with the wood species for the living room, since old pine is hard to come by, and I recently caught Scott staining some poplar, and that’s just wrong. We’ll worry about that when we get there.

I’m not sure how long it will be before we get all the trim up, but it’s at least in the works, and the prototype has been approved. Once all the wood is purchased and the production line at Bent Tree set up, things will roll pretty quickly.

And when the window trim done – downstairs, upstairs and in the attic – we’ll be ready to move on to less contentious projects. Like kitchen cabinets.