A good thing about building your own house, and running out of money, is that, with finishing touches delayed, you get a lot of time to figure out if they’re really the right thing to do. Consider our kitchen cabinets. For better than ten years, we scrapped, snitted, and screamed about what to do about new cabinets, and in a way it didn’t matter, since we couldn’t afford them anyway. All I ever wanted were inset doors and drawers. Period. End of conversation.

Scott, on the other hand, was open to just about anything, and could be pinned down on nothing. I wanted them painted, and Scott didn’t want them painted.

All we knew what that our custom farmhouse kitchen would have to have custom cabinets.

That’s how it went for better than 10 years. 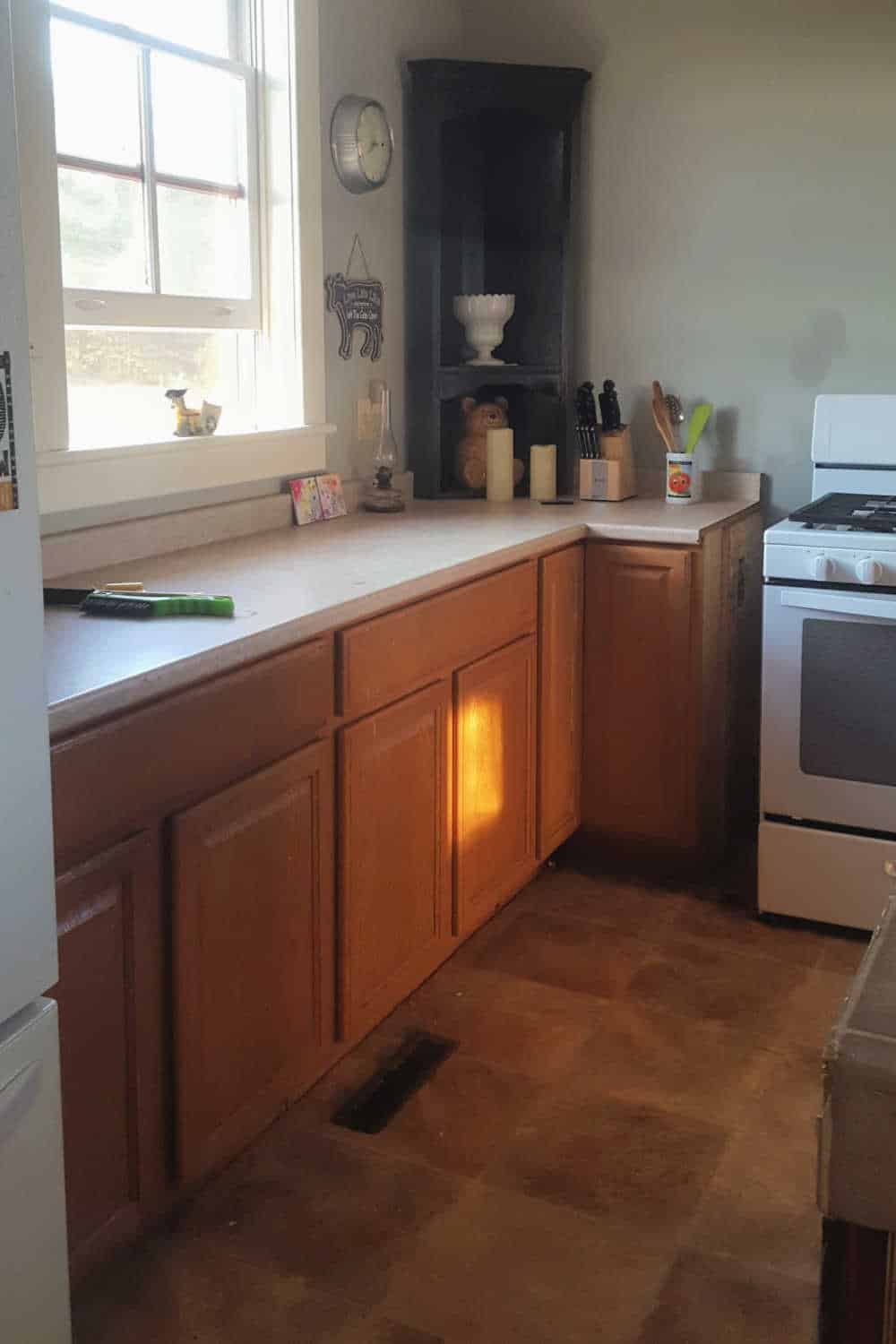 These stock Lowe’s cabinets were just as unattractive now as they were when we installed them ten years ago. 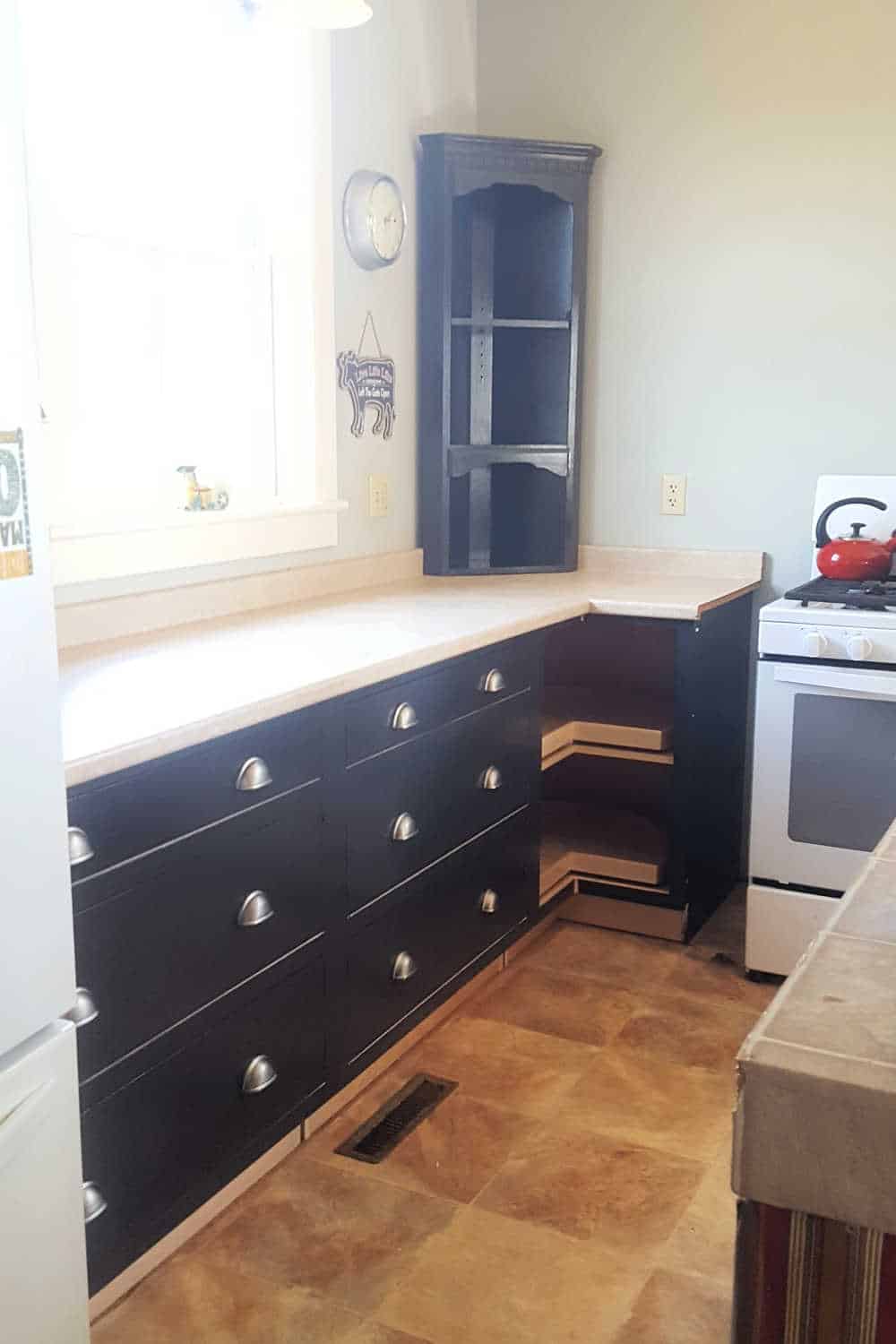 I really like the look, the ease, and the efficiency of the drawers-only base cabinets.

When we first built the house, even Lowe’s stock cabinets were out of reach. In order to get the occupancy permit, a kitchen needed a refrigerator, a sink and a stove, and that’s exactly what we had. The sink was mounted on a 2 x 4 frame, though I did get a bit fancy and put a bit of fabric around the frame to sort of give the room some pizazz. In the middle of the floor, where the island was to eventually go, the drain and the waterlines were exposed. I stuck a folding table beside them, and we lived with that for at least a few months, until we got the cash and ambition to go to Lowe’s and get some bottom-of-the-line cabinets. Our oldest son got tired of the table, and built a 2 x 4 island, that we’ve been using for years, and he built a stand for the double oven, helping to convert it from a mere horizontal plane to a fully functioning kitchen appliance.

When it comes to decisions on designs, Scott tends to be a bit mercurial, while I’ve had some of my drawings and plans for 20 years and haven’t changed since I made up my mind. Sort of like a butterfly and a cinder block. Every time we go to someone’s house, he’ll point out the cabinetry and other interior touches, and I’m like, that’s nice dear, and when we go to the next person’s house, he likes that as well. He’s too indecisive and I’m too rigid, and if you think that’s some sort of charming Yin/Yang thing, you’d be wrong. He’ll say something along the lines of I think we should… and I’ll wordlessly whip out a 20 year old drawing, thus ending any conversation. I may not be right, but at least I’m consistent.

If you’re looking to incorporate the look, the feel and the function of a farmhouse into your home design, you’ll find dozens of great ideas here – https://www.annieandoak.com/blogs/design-style/farmhouse-kitchen

In addition to differing preferences in style and function, I prefer painted, and he’s of the mindset that painting wood, even softwoods, is sacrilege. For the most part, it’s just easier and cheaper to not make these sort of decisions, rather than go through actually coming up with a plan. We’d go back and forth as to whether we want our kitchen with the polyurethaned oak raised-panel stuff straight out of the 70s, or his contention that my ideal kitchen looked more like a 50s doctors office. I’d occasionally whip out my stock refrain – “I want inset doors.”

When I bought a used door for the office, Scott saw its raised panels as a sign that I was yielding on the inset doors, and how could we possibly have raised panels on our doors, and inset doors on our cabinets, like having them both in the same house would be in violation of some immutable design law. With raised panels on the doors, he saw an opening, contending that I had obviously changed my mind. I pointed out that they were 1.) not painted, and 2.) I hadn’t changed my mind, and I’d whip out an old photo, and the conversation would end. 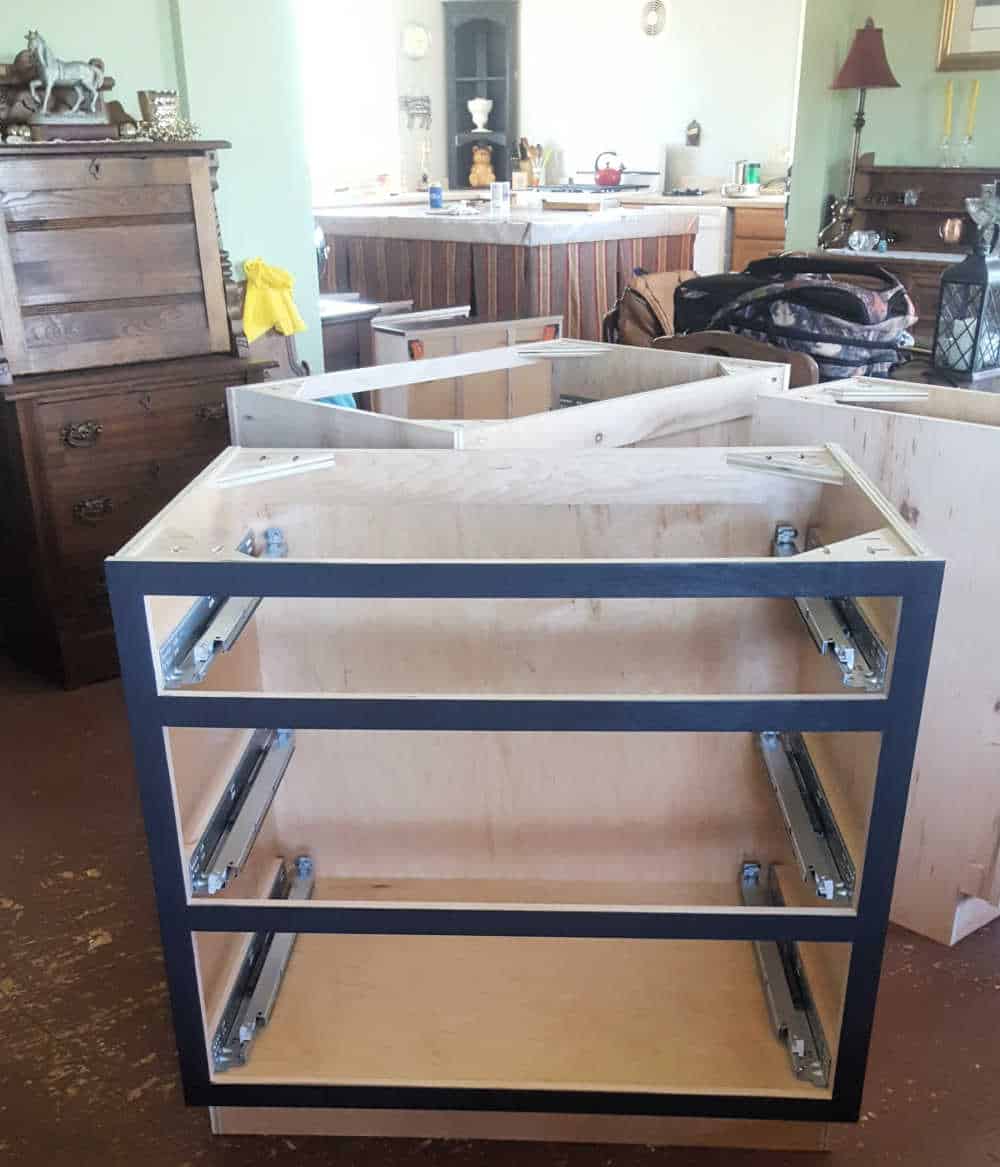 Life was slightly disrupted while these beasts were lined up in the dining room. 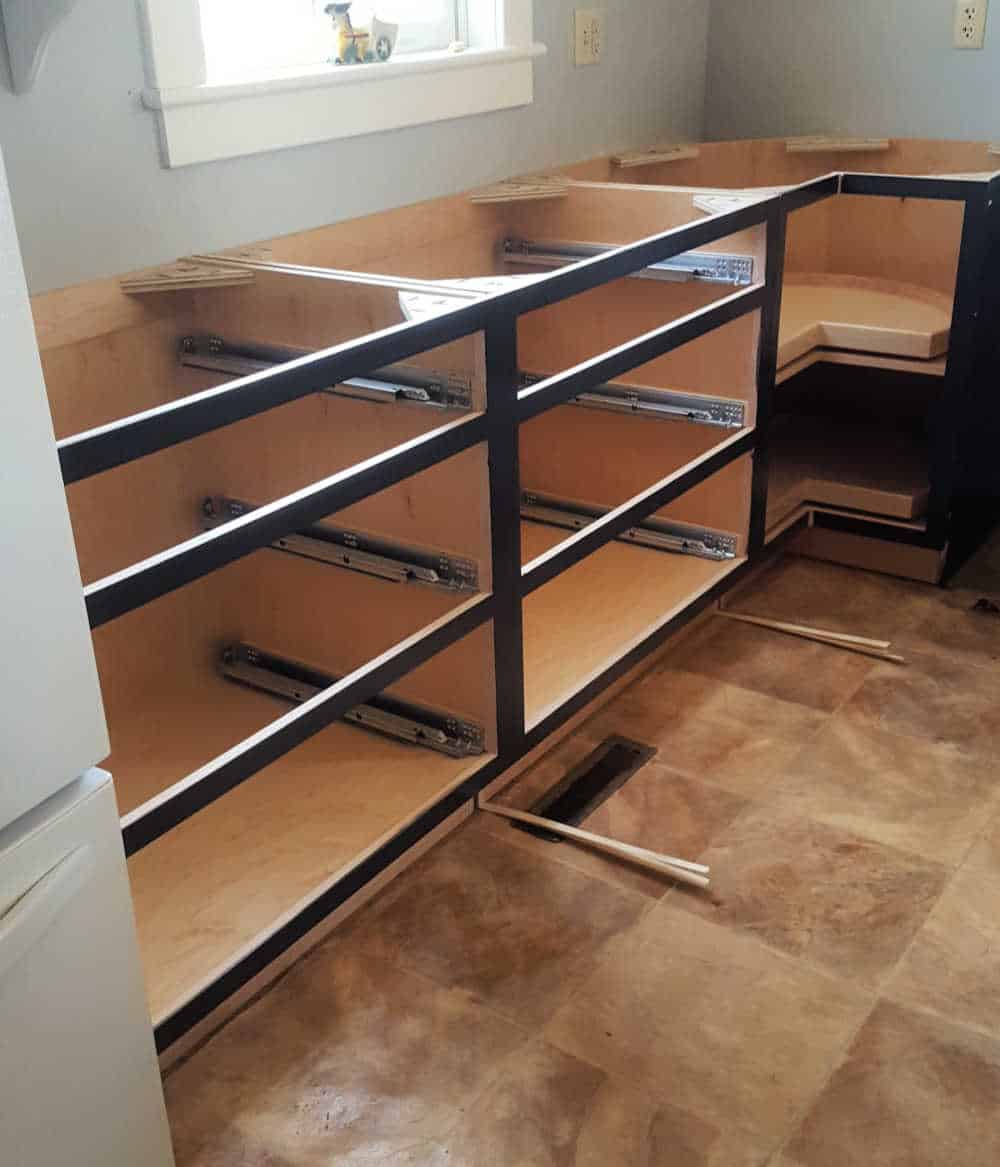 Somewhere along the line I had purchased a salvaged kitchen cupboard, complete with inset doors, further reinforcing my inset doors stance.

And I have pages and clippings and books with kitchen cabinet proposals, and as far as I was concerned, he was leaning towards his oak monstrosities, and my cabinets with inset doors, were prohibitively expensive, and so we were at a standstill.

The festering carcasses of a few cabinet attempts are still sitting in the basement, but they hadn’t gone too far, the result of the many battles over style, materials and finish, his mercurial nature, and my total lack of gratitude.

The weird thing was that the layout of the kitchen was fixed. We knew exactly what we wanted as far as function goes, but then he’s get on his kick that he was going to make the cabinets, and I would respond with a simple “When?”, since he works at least 40 hours a week at his regular job, and the farm, and the kids, and I didn’t see the time or the tools ever becoming a reality.

In the meantime, our bottom-of-the-line stock cabinets from Lowe’s were holding up reasonably well, and were marginally functional, though they were quite unattractive.

So we’ve basically debated for better than ten years about colour and door design. The one big thing is that the inset doors and drawers, even though they’re a more simple design, require a high degree of craftsmanship. Rather than the door sitting on the frame, the door sits inside the frame, and the gap around the door is part of the appeal of the design, and also the part where laxity in craftsmanship can be exposed. It looks simple, but it actually requires more precision than an overlay door. The complexity and precision is why nobody does them.

Two things were finally pushing the project forward. Number one was that the kitchen sink was about to fall through they countertop. Ten years with water leaking around the rim of the sink had compromised the counter top. The faucet had shifted, and it was a matter of time before the weight of the sink brought it down through the slowly-deteriorating particle board and Formica. 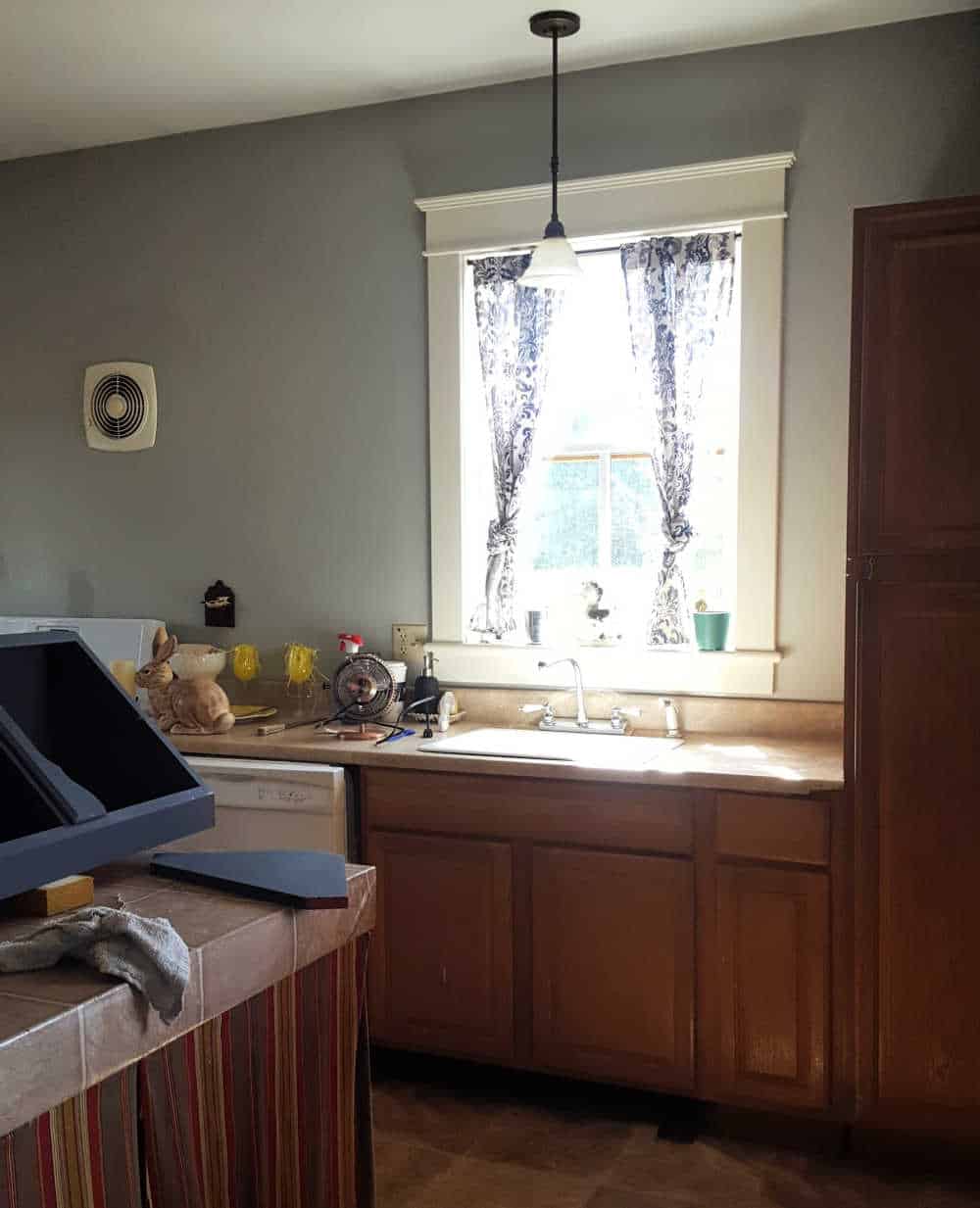 The original sink-base, mercifully replaced before the sink fell through the countertop. 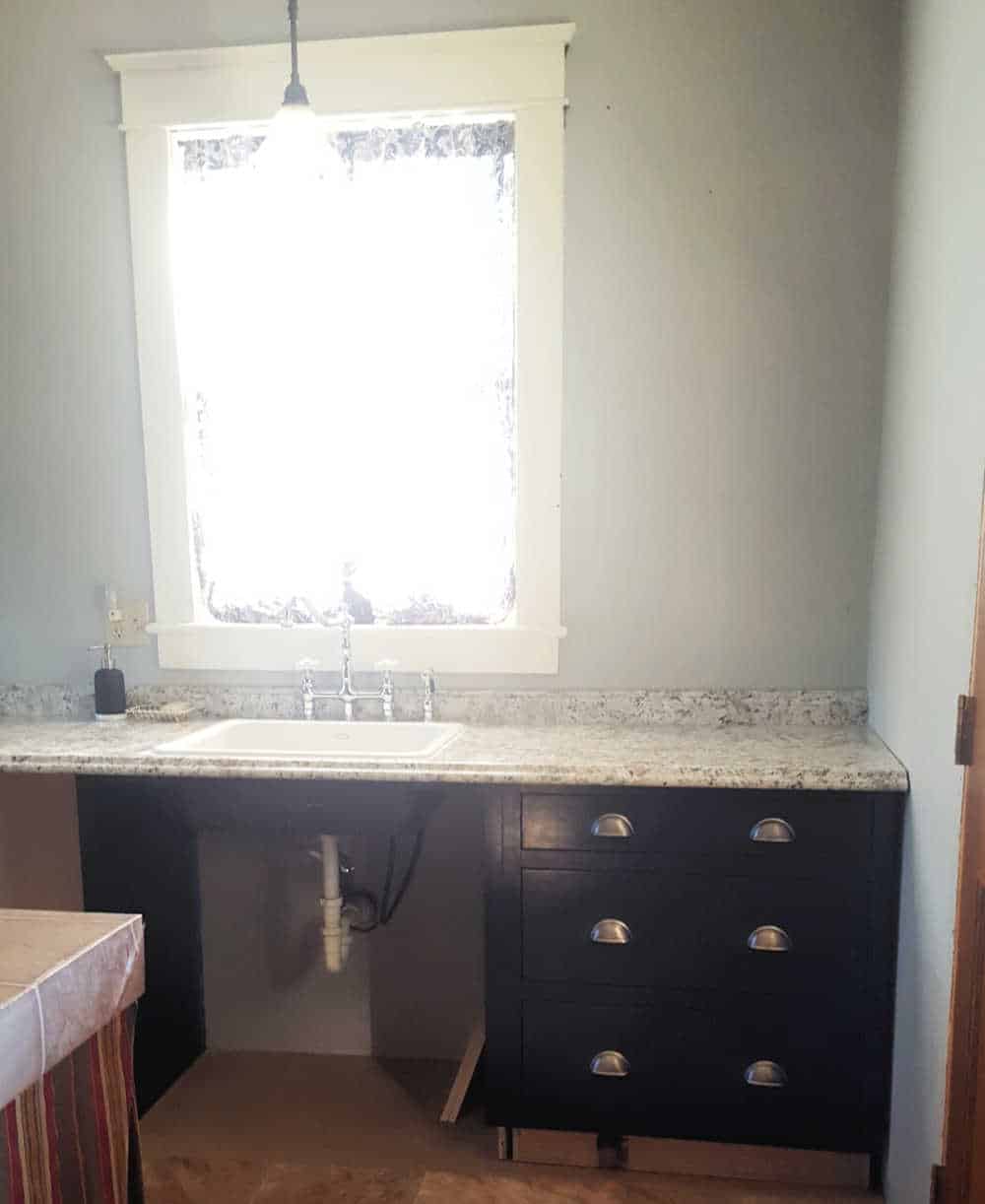 We had to buy a new section of countertop so that the sink had somewhere to go while we wait for our final countertop.

The second thing, the main thing, that got this whole project going was the retirement of a former co-worker. He retired, and then he and his wife opened a woodworking shop. And we had gotten them to make the trim for our kitchen windows, and that was a start.

Another major factor was the advancement in drawer slide technologies, one that made my inset drawers at least, a bit more realistic.

So we finally had someone to build the cabinets, and my inset drawers were more likely to happen. And Mark had found some maple that would work well, in terms of our design, and the workability, and paintability of the material.

And after a year of back and forth, with Mark and Linda acting both as marriage counselors and as cabinet-makers, our deposit was made, and our order was placed, for cabinets with inset drawers. And I picked out paint.