Shippin’ Up To Dublin – Part 2

Shippin’ Up To Dublin – Part 2 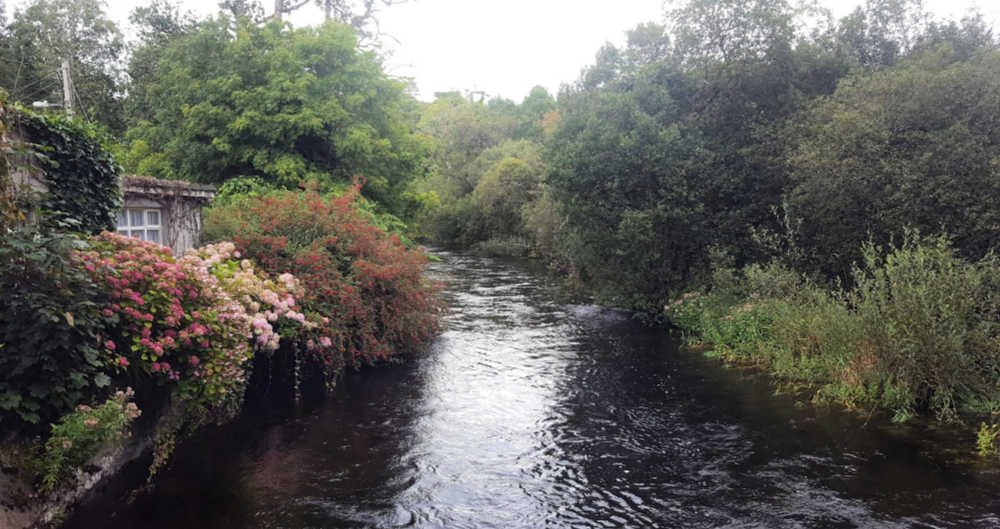 About five years ago, Scott mentioned that we should go to Scotland for our 25th wedding anniversary. His statement was more of a kind gesture than anything that would ever resemble reality, as likely to happen as finishing the basement.

We talked about it with a few family friends. Did they want to go? It was just a vague thought sort of floated around for the next couple of years. But it started to develop into an idea. Could we really pull it off? We’d discuss it over dinner, take some notes, gather some ideas, do some homework.

We started with a group of 7, and a UK grand tour, landing in London, driving through Wales, catching a ferry to Ireland, around the west coast, catch another ferry to Scotland, sort of wander back to London. Done. Two weeks. Looking at a map, pretty easy.

It didn’t take long to see that that strategy was a bit over-ambitious, to put it kindly, totally idiotic to put it realistically. Something had to give.

When it was settled, there were five of us going to Ireland. I was excited, for sure, but a small bit disappointed, because, well, Nessie and Highlander and Mary, Queen of Scots, William Wallace and Clydesdales and Shetland ponies.

I had long questioned my Irish, i.e. Gaelic roots, in spite of my great-grandmother being from Ireland. She was a Protestant, and some of her old-world, anti-Catholic biases had sort of dribbled down through the generations, to me, who had promised my grandmother, literally on her death-bed, that I would marry a “nice Protestant boy”.

Fairly certain that I was in no way true Irish, at a neighbor’s St. Patrick’s Day party, I wore a pin saying “I’m not Irish. Kiss Me Anyway.”

But our plan came together. We created an itinerary. We got plane tickets, largely thanks to oldest son Jonathan, and his frequent-flyer miles. We booked a car. We booked hotels, and castles and AirBNB.

And I decided I’d try to pin down my “Irish” roots.

Some years ago, I mentioned the whole “my great-grandmother was from Derry or Kerry or something like that” thing to a co-worker’s Irish-born wife. She looked at me like I was an idiot. Her response was a firm “She was from Derry.”

That was all I had to go on. Margaret Port, from Londonderry. And her photograph.

Her US death certificate provided quite a bit, and as it happens, a lot of it was wrong. Her married name was Smith, I knew that, but Smith is a suckier search term than Port. And I wasn’t looking for Frank Smith anyway. I was looking for his wife.

The name “Port” sucks as a search term, but as a family name, it’s as good as it gets – it’s not a common family name, and one of the earliest sites I stumbled on was johngrenham.com, and his surname distribution utility. Type in your surname, and it maps it out. In Londonderry, between 1864 and 1913, there were 47 “Port” households in Magherafelt and 5 near Cookstown.

So I went with Magherafelt, trying to find a Margaret. Nothing too promising. Called my Dad’s sister. She didn’t remember anything useful about Margaret Port, or so she thought. There was a sister, Catherine, and maybe a brother, was it James?

Digging around in the Magherfelt Ports. Nothing. Look into the five Cookstown Ports. No Margaret. Two siblings, John and Catherine, looked promising. Sign up for two weeks of ancestry.com. Two weeks of findmypast.com, myheritage.com. familysearch.com. A few Facebook pages. John Grenham’s site. Ask my Aunt again? Anything else you remember? Yeah, she went by Maggie. 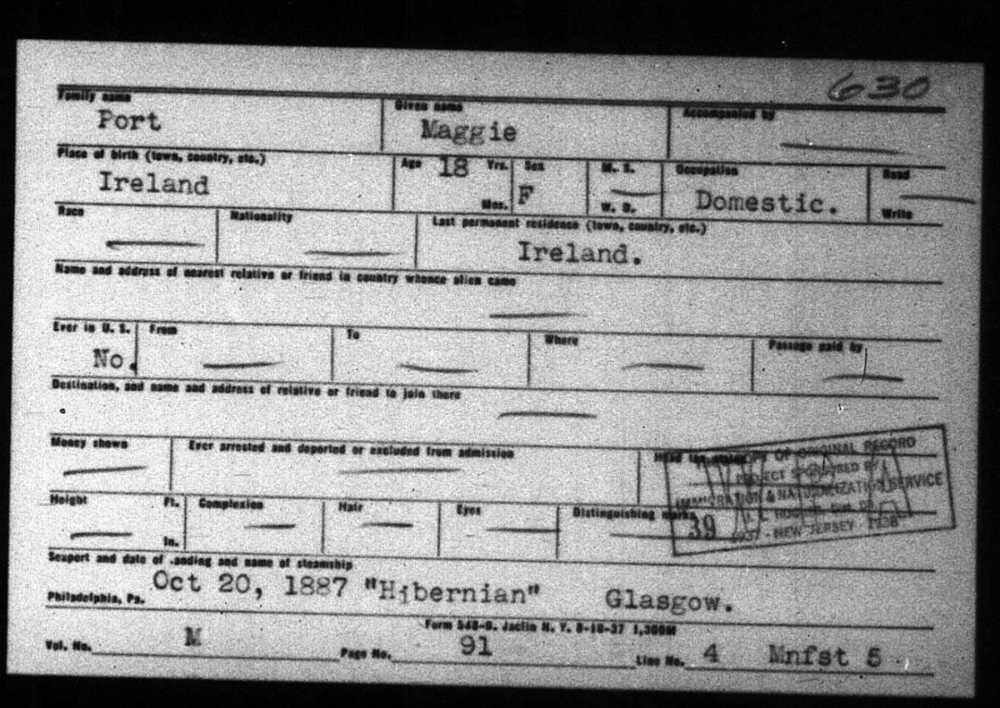 Though it originated in Glasgow, the S.S. Hibernian picked up passengers in Derry, on its way to Philadelphia. 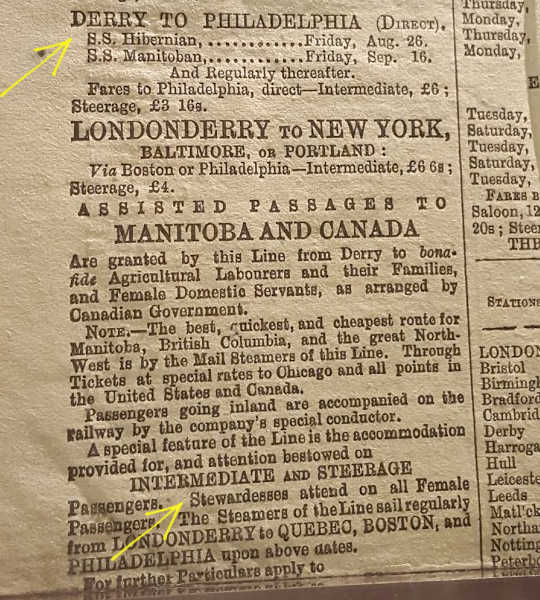 This clipping was in a time capsule display in Derry. It happens to reference the Hibernian, providing safe passage for female passengers.

But I find her and all of her siblings – 9 kids in all – born in Ballinderry. I find her birth record – 1862. I find some of her parents records.

Through Griffith’s Valuation – basically a real estate assessment – I find her uncle’s home, and her grandfather’s. I can map them to Google maps, and they’re still standing. I find the church she most likely attended.

Maggie’s tale has a presumably happy ending. I’m not so sure about the rest of her family.

Her father, Elijah, was a weaver, with 8 children who survived to adulthood. Maggie and her sister Catherine came to the US. Sometime – 1887 is my working date – the entire Port family left Derry for good, the two girls to the US, the rest to Glasgow.

I had a couple of weeks to come up to speed on the linen industry, both from the perspective as Elijah the weaver, and in terms of the economy of Derry. I know the basics about flax growing and flax production., of spinning and weaving, at least what a loom looks like, but I don’t have much of a grasp on the industrialization of the linen industry, and how that would have affected a weaver from the outer edges of Derry, far from the city. But somehow, Elijah Port, his wife Catherine, and his remaining children, went from being a weaver in rural Ballinderry, and ended up as a labourer in the Garngad, a factory neighbourhood in Glasgow, a since bull-dozed factory neighbourhood. Photos of the place suggest there were probably a few detours en route to a happy ending. https://www.theglasgowstory.com/image/?inum=TGSA05269

And since tracking down Maggie, or her sister Catherine – I haven’t tried to contact any of Catherine’s family – hasn’t worked out too well, I’ve sort of had to frame things around their father Elijah, and his fate, and what brought the Ports from Scotland to Ireland in the first place, and what exactly made them leave, and why.

A drive-by of Maggie’s uncle’s and grandfather’s homes offered no clues. The houses had either been added on to, or maybe been replaced on the same site. I found her church, though no grave-markers, not for her grandparents or cousins, or her baby sister. 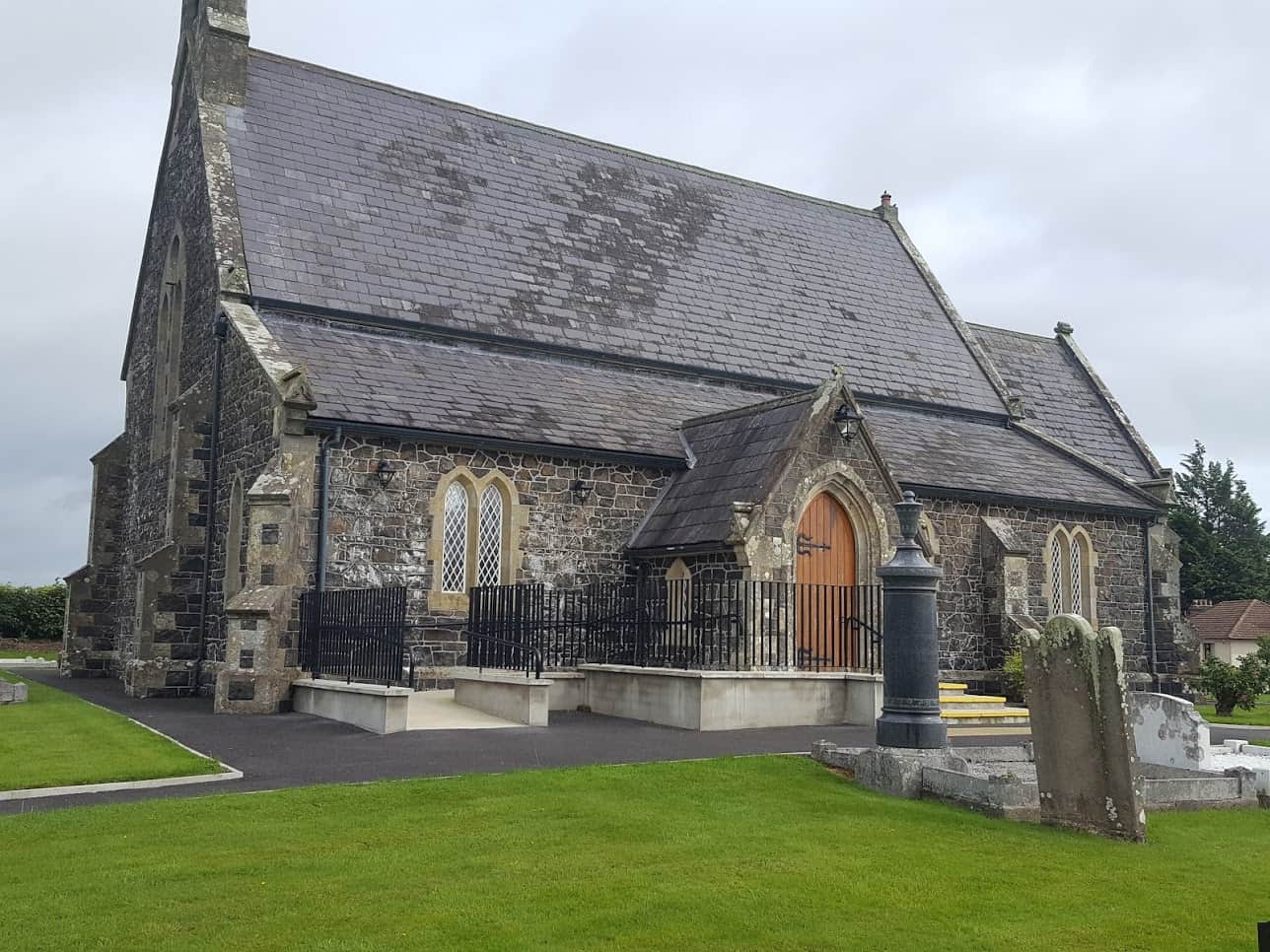 I found my family's church, St John's, Church of Ireland, Ballinderry, built in 1849.

So as far as my genealogical research went, this is probably about it. If I want to find out anything more about Maggie’s life there, I’ll need to up my digging game, and I need to figure out how to organize it all. I have a bunch of stuff, over about 10 services – and not a whole lot that I can recover quickly. I got a couple of books, and they mainly focused on how to research, and the research piece isn’t too hard for me – anyone who has done any sort of land research can readily do genealogical research, but since your searches are provided by someone who is providing you a service, you may not end up with a direct link to your, say, death certificate, just the service’s link to the death certificate, and then when you let the service lapse, you lose your link to the document, and I found at least one service that will only download low resolution images of documents, which are basically unreadable. So that sucks as well.

But to really figure out the story of Maggie, I need to figure out the story of the flax industry, the economic structure of everything – looking at baptismal records, it looks like they may have moved several times, but it’s almost as likely that the church structure, or record keeping practices changed – civil birth records began in 1864, and before then, we mostly need to rely on baptismal records, but if those records didn’t get digitized, or digitized incorrectly – like “Brummond” instead of “Drummond”, it can be misleading (and some people’s handwriting is simply atrocious). Or maybe your ancestor’s page was the one that the mice got into, or that the roof leaked over, or was burned in a fire, or got coffee spilled on it.

But combining on-line records, family stories, and some literal boots-on-the-ground research, you can come closer to the people who came before you. You’ll stare a bit harder at the photographs, more intent on finding a family resemblance. You’ll consider your own reactions, your own characteristics, you own appearance. You’ll wonder if you would have been strong enough, or smart enough, resourceful enough.