Whether you call it MiG – management intensive grazing – mob grazing, managed grazing, strip grazing or any of a half dozen other names, rotational grazing is a system of allowing animals to graze a pasture, then providing that pasture with a rest period.

It’s been around forever, shepherds moved their flocks from place to place, knowing what forages grew when and where. Tethering – simply tying out your animals to provide access to new grass – is still a useful way to manage grazing.

In the western US, and in other mountainous parts of the world, cattle are still moved between winter and summer ranges, taking advantage of different weather conditions, and forage species.

And while the concept of rotational grazing has probably been around since grazing animals were first domesticated, our modern version wasn’t really practical until the 1930s, with the development of convenient, non-lethal, electric fence chargers. Advances in charger (also called energizers) technology, wire types, insulators, post setting equipment and take-up reels have made rotational grazing a realistic option for a lot of farmers.

Rotational Grazing on a Continental Scale

While it’s a bit idealized and glorified, Allan Savory’s TED Talk helps convey some of the philosophies and objectives we adhere to, and try to attain, in a rotational grazing system. It’ll also help explain how the term “regenerative agriculture” became popularized.

So what does a rotational grazing system look like in Virginia? It starts with the perimeter fencing.

Fencing has it’s own area of law for a reason. Construction standards, what it looks like, where it’s build, what it’s containing or excluding, who pays for it, who takes care of it. It varies state by state, county by county, and subdivisions often have their own regulations regarding fencing. Your state Farm Bureau will have some good resources, and local fencing contractors tend to be well aware of fence law.

While it may or may not be a boundary or division fence – meaning it’s on a property line – a solid perimeter fence, also referred to as a permanent fence, is the basis for rotational grazing systems. These perimeter fences are what actually contain the livestock.  https://law.lis.virginia.gov/vacode/title55/chapter18/section55-299/

Board fencing, woven wire and high tensile wire are the main types of perimeter fencing you’ll see here in Central Virginia. On our farm, we prefer electrified high tensile, with its relatively low installation cost, low maintenance cost, and because it’s wildlife friendly. The board fencing near our house works well for horses, and for newly arrived animals, that may not have ever been exposed to electric fencing, but it’s not very robust, and needs painting every few years. Woven wire is a good choice along heavily-traveled roadways – calves are known to sneak through other types of fencing – but it can trap wildlife, particularly baby deer. And it can be hard to maintain, since you can’t mow directly beneath it. 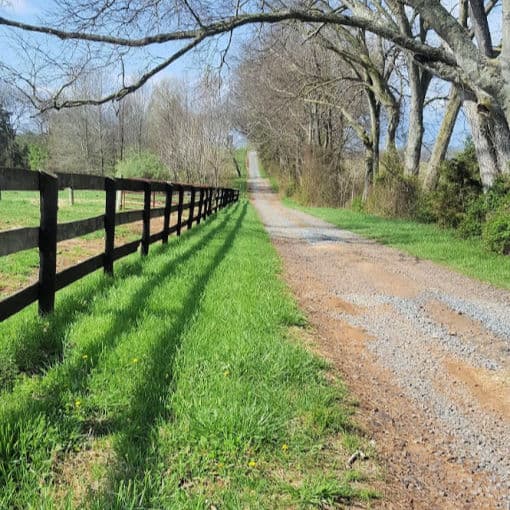 Black board fence is timeless and beautiful. 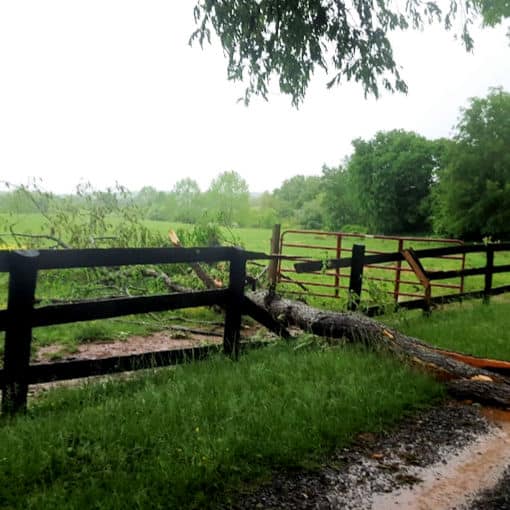 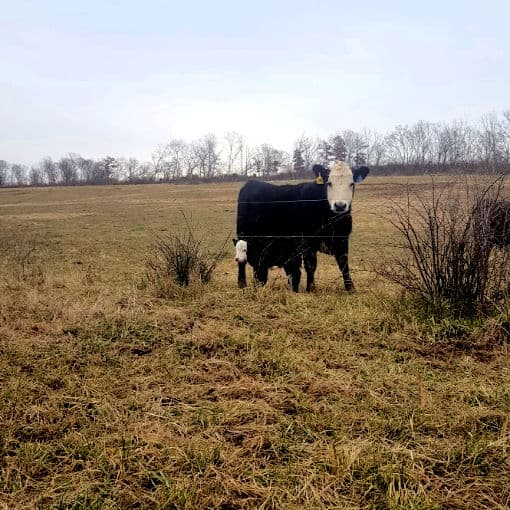 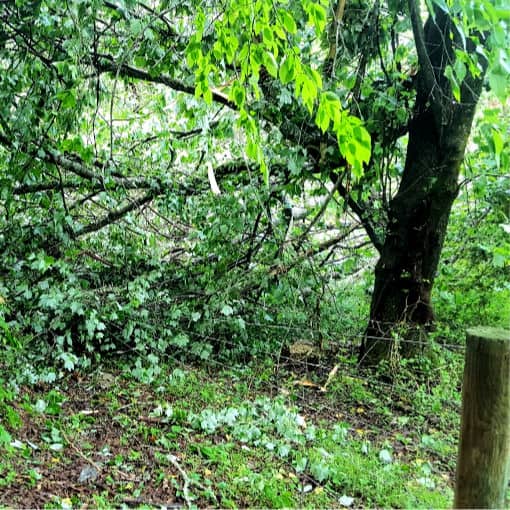 Once this branch is removed, this high-tensile wire will go right back to place. 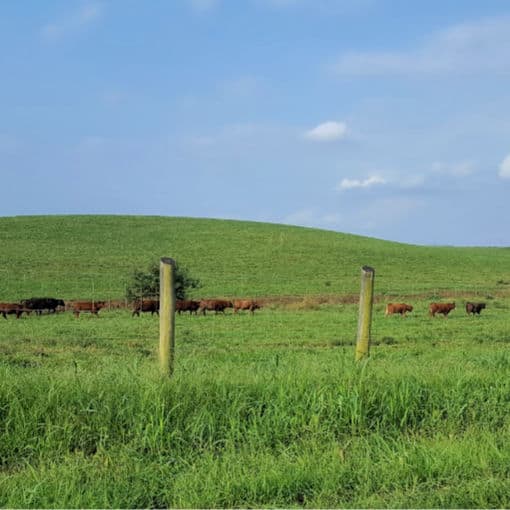 If it's mowed on both sides, woven wire is a good fencing choice along busy roadways. 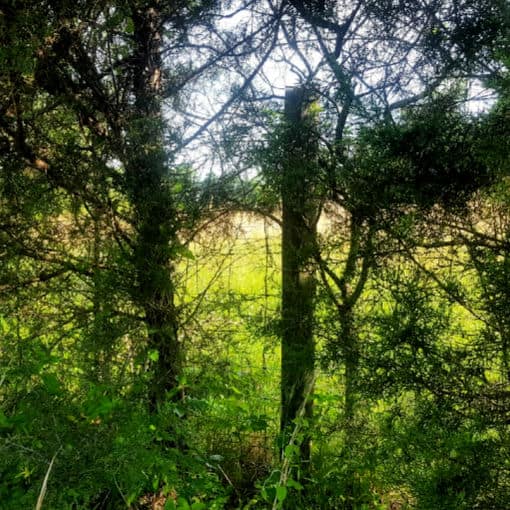 Somewhere buried in these cedars is a woven wire fence. This is not a recommended practice.

Terrain is most often the limiting factor when installing perimeter fencing. At our home, we converted crop land to pasture land, so we were dealing with fairly level, cleared ground. But most grazing land is land that’s not suitable for cropping – it’s wooded and rugged, often with limited access to water. It’s rocky, it’s hard to safely maneuver equipment on it, and it’s almost impossible to set fence posts. It’s on this type of ground that you’ll see barbed wire tacked from tree to tree.

Adverse possession and prescriptive easements – Whenever the subject of fencing comes up, someone will bring up the topic of adverse possession – the idea that you are ceding your land to your neighbor if the fence isn’t exactly on the property line. On the big list of things to worry about, I’d put this near the bottom. It’s a pretty high legal hurdle, particularly on an undisputed boundary – one that’s been recently surveyed, and the corner pins are in place.

And within that fence is a watering system. If there isn’t a source of ground water, either a spring or a well system, then you have to rely on surface water. During the summer, a lot of our small waterways go dry, surface water may not be an option. At one rental farm, we literally had one single reliable water source for a five hundred acre pasture – that’s hard to work with. And there are the conflicts between water access and water quality – our animals need a water source, but they don’t really need to be wallowing in the waterways. If you fence off waterways, you may be limiting some our your land’s grazing potential.

At our house, our cattle are fenced out of the waterways, and we have troughs in every pasture, making watering easy. 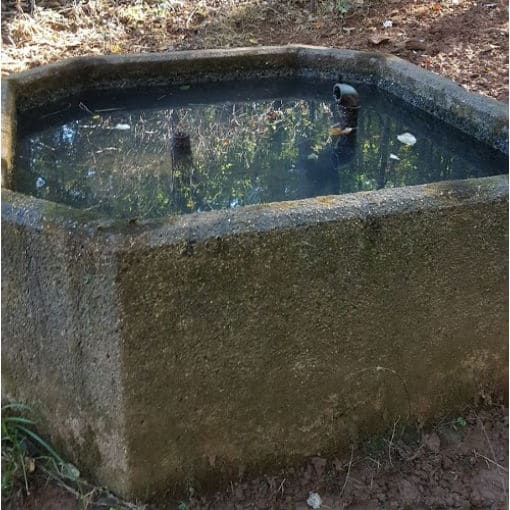 This improved spring relies on underground pressure to supply water. It needs no electricity. 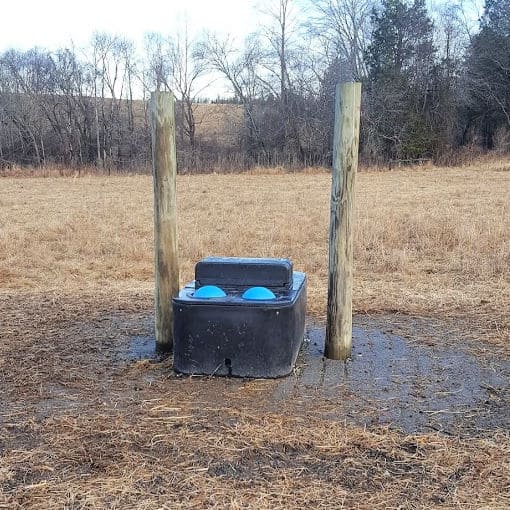 This Mirafount watering system relies on a well and pump system for water.

Within our perimeter fence we have more permanent fence we (“we”, as in Scott and me. I’m not sure what other people call it) a “cut” fence, subdividing our pastures, but not to the standard of a legal fence. It carries the “heat” – the electrical charge – to the temporary fencing.

Some farmers may just switch cattle between the sides of the cut fence, and cut fences can be used for “fence-line weaning”, a method of weaning calves by placing the calves on one side of the fence, and the mamas on the other. This way cows and calves can stay together, but the calves can’t nurse.

And the best way to ensure that animals stay where they’re supposed to is to have good forage, which can be a challenge. In order to have a really effective grazing system, the forage inside the fence has to better than the forage outside the fence – it’s so much simpler when the animals want to stay in.

During the winter, cattle graze on stockpiled fescue. It’s a form of standing hay, that allows the cattle to make it most of the way through the winter, without being fed hay. https://farmlanddream.com/about-all-that-mud/

Winter annuals – planted in the fall – come on early, and provide the first grazing of the spring. New fescue growth occurs a little later, and provides grazing until it goes dormant, sometime around mid-May. Crabgrass (yes, that crabgrass) and Johnsongrass provide most of the summer grazing, with summer annuals – millet, sorghum and Sudan grasses filling in the gaps. 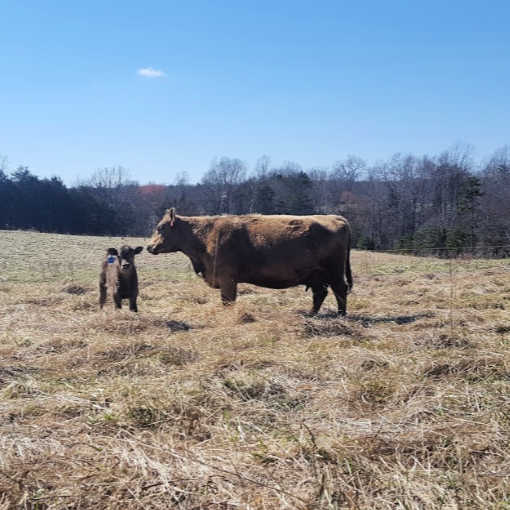 It may not much to look at, but this stockpiled fescue will provide adequate nutrition into early spring. 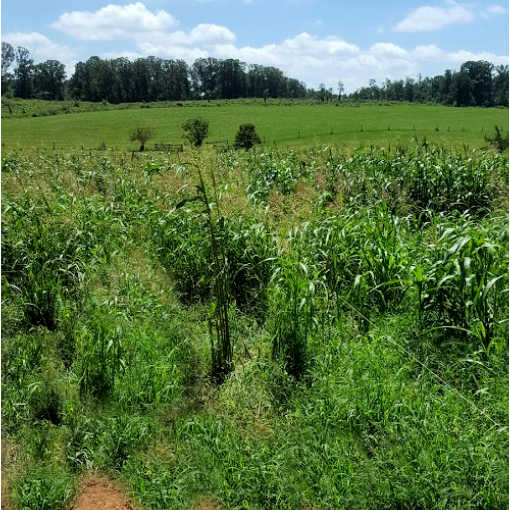 Though it's not necessarily very attractive, this mixed sorghum planting will provide quality grazing during the heat of summer.

The temporary fencing system consists of a charger, either battery or AC powered, poly-wire, a form of lightweight plastic fencing, and step in posts.

When we designed pastures, I grabbed a roll of poly-wire from the co-op, looked at the label, and used that to determine the width of our fields. I just needed to make sure that our field width was less than the length of the wire I was going to use. 100 meters seemed like a good number, and it actually works pretty well, at least where the field is wide open.

Electric fence chargers supply short, high energy pulses – the idea is not to kill anything, but to instill a healthy respect. Basically, the larger the animal, the harder it gets zapped, which is why older animals tend to have a greater respect – at some point in their lives, they probably have learned the hard way. It’s also why calves can go zipping through the fence – they’re fast and light and they don’t make a solid contact with their feet to the ground, so they don’t always get zapped. Of course if they get zapped on their way out, they have second thoughts about coming back in, which can be a pretty big problem.

It’s also important to remember that this temporary fence is only meant to keep cattle on or off certain sections of the pasture – it’s not meant to keep them out of the road, or off the neighbors lawn. The fence is moved during the day, and the cows know where it is, but deer are more active at night, and more prone to running, and they go through it all the time. I’d say that literally once a month or so, I’ll go to check cows, and the fence will be laying on the ground, and a post or two pulled out, a sure sign that a deer went through some time during the night. 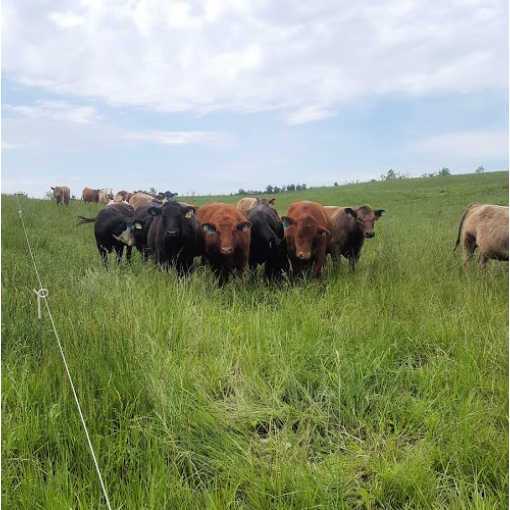 These girls would really like me to hurry up with the new "break". 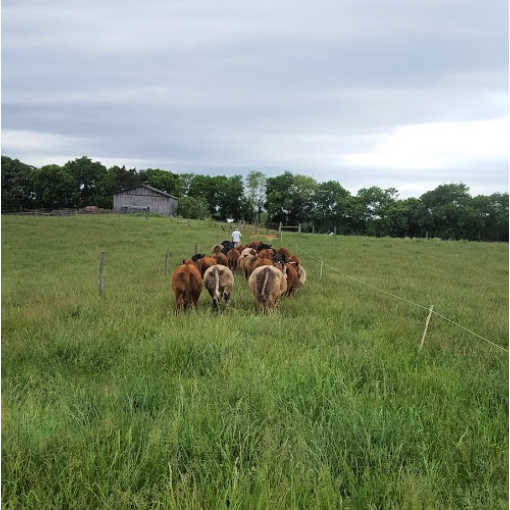 These cows are following Scott to a new pasture.

And there are some animal welfare benefits associated with rotationally grazed cattle. They tend to be more calm, since they’re more accustomed to human handling. And health issues are detected earlier, so that they can be treated earlier. 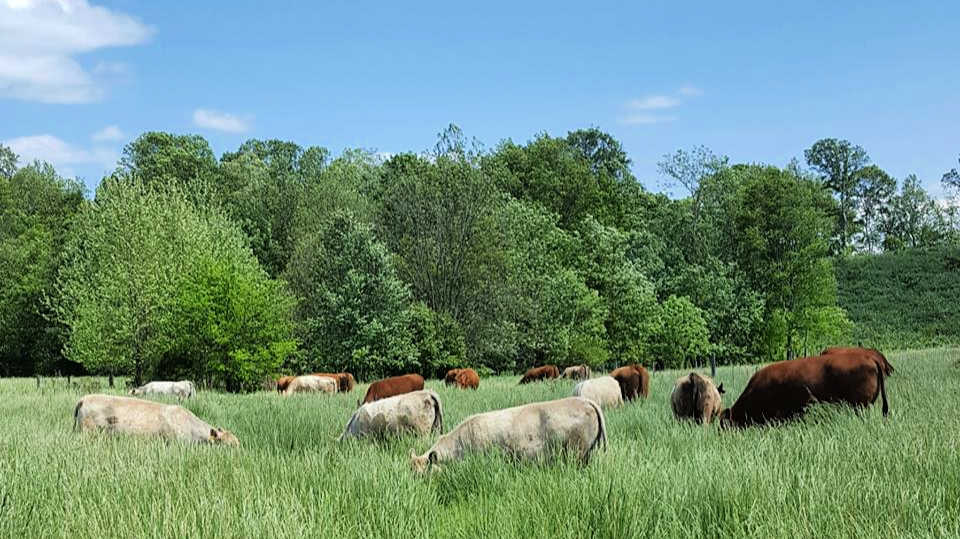 Cost is a big factor when considering a managed grazing system, both in terms of materials, and in terms of manpower. The additional fencing, watering systems, and time spent moving cattle can offset any feed cost or cattle health benefits.

And two big animal welfare concerns can arise. When cattle are fenced out of waterways, they may be fenced out of the shade as well, so ensuring cattle have a way to cool off is essential. And flies can become an issue, since cattle can’t necessarily move away from areas where files collect.

Additionally, many landowners are surprised to see how unattractive managed pastures are. With several species of forage, all with different growth patterns, in different growth stages, some actively growing, some dying, some ignored, it’s understandable that someone may not want an actual grassland near their home. It’s not a lawn. Managed pastures are typically only mowed twice a year, for weed control. Most of us want the grassy areas around their houses managed a little differently than the pastures. So it’s fairly common for the pastures closest to your house, or those along driveway managed a little differently than the pastures out of view. Mowing a few extra passes within the perimeter fence is a common means of compromise. 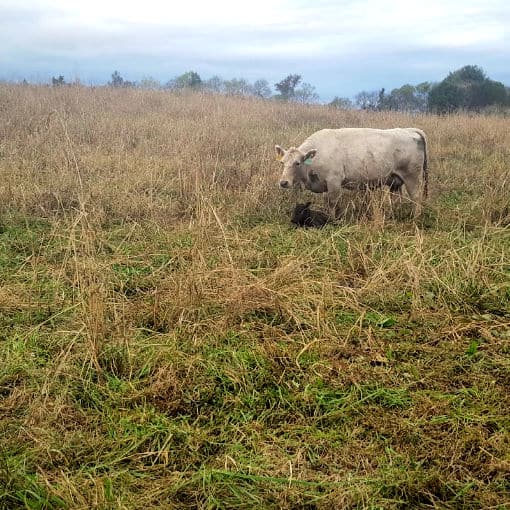 This pasture not only provides adequate nutrition for this Murray Grey cow and her newborn, the abundant plant matter helps this calf stay warm and dry. 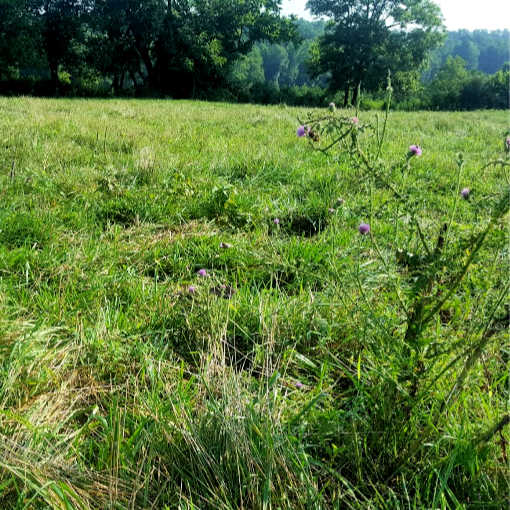 There will always be some plants that animals won't eat. How much effort a grassland manager wants to put into controlling them is a matter of personal preference.

Implementing a managed grazing system can be beneficial to landowners, and to farmers as well, but as with any agricultural practice, the ideal and the reality may not quite match up.